TIME TO CHANGE THINGS UP

Reflecting back on my first post of 2017 I had laid out some very specific yet realistic goals for what I thought could be attainable during the course of the year. At the time they really didn’t seem like they’d be that far out of reach. For a quick recap this is what I set out to achieve:

Out of all of those goals which ones have I achieved? None. Which ones are still able to be checked off? Well… in all honesty, probably just #1.

I was on a pretty big high following my last competition which was in mid-December of 2016. I had bulked up to the 275lbs class, weighing in at 272lbs the night before and at one point on my way to bulking up I had surpassed the 280lbs mark. With the weight gain came gains to the weights, including a lifetime squat PR of 440lbs, a competition PR benchpress of 302lbs and a lifetime +50lbs PR for the deadlift with 551lbs. Shortly after that competition I went on to achieve something that had been plaguing me for years: the 3 plate benchpress. Everything was great. I sat down and wrote out my list for 2017 as you saw above.

The 2017 challenge was off to a great start and was something I thought I absolutely needed. While I was pleased with my performance in the 275lbs division I wasn’t comfortable with how I looked. Granted that doesn’t matter when it comes to powerlifting but I figured if i could cut down and maintain or gain strength then why not go for it? For the first few weeks or so I was all-in, counting macros, increasing cardio (barely) and just making sure I was all around healthier. I was sticking with my PTW program.

And then the wall hit that always happens whenever you start cutting: the loss of strength.

First it was the benchpress. Then the squat. And finally… the deadlift started to plateau.

So I decided to scrap PTW and move into another program. This time it was a well known program developed by some elite level powerlifters: The Strength Athlete 9-Week Intermediate Program. PTW was starting to feel monotonous and I wasn’t happy that the weight was going up so I decided to switch it up. Things were going great and I was slowly starting to ramp up towards a peak week in the final 9th week. Then the injuries started and it has been a domino effect ever since.

First came the back tweak. I was at work and was sitting in a chair when I leaned over and tried to pick up a piece of equipment that was attached to a polestand that was about as thick as a barbell and couldn’t have weighed more than 20lbs. This immediately threw the upper left side of my back into a huge spasm that nearly knocked the wind out of me and continued to tweak through the afternoon.  The pain was so bad that I ended up receiving some prescribed muscle relaxers just to take the edge off. I forced myself to take a week off. Once things felt better and I could move around 100% without use of the muscle relaxers/pain killers I jumped right back to where I left off with a PTW reboot.

Thinking I could handle 365×6 for 2″ deficit deadlift I ended up aggravating an old back injury near the lower right hip close to the SI joint. That region has always felt like a “knuckle that needs to be popped” but this time it felt much worse. This is when I started using the hex bar for deadlifts. Then for whatever reason I pulled a ligament/tendon in the right groin that has made squatting a headache and still bugs me from time to time.

Because of all these injuries this has pretty much scrapped most of my 2017 goals. I can’t compete due to these injuries. I can’t  go for new PRs due to these injuries. The weightloss challenge kind of fell to the wayside (I ended up getting back to maintenance of around 255lbs or so which was fine). And the increase to subscribers/followers for social media? Well if I’m not putting up big lifts how much of a draw am I really? So where does that put me?

This has left me with one goal which I am still hopeful to achieve: get down to my target 242lbs bodyweight goal. I am still going to maintain the PTW program which has been going well as of late. I’ve always felt like my body type was one that was always stuck between getting more lean/jacked or getting more huge/fat and something that I yo-yo between constantly and usually doing the opposite of what should be happening (I seem to lean out through the winter and bulk during the summer). In order to help achieve my weightloss goal by the end of the year I had to reach out and get some help and its something I think I’m going to include everyone on as a new journey I’m taking myself through. This will be the main core of a new featured blog and I’m hoping that… if you’ve been reading this far… you’ll be willing to come with me and watch the transformation for yourself.

The (hopeful) secret to this success? Flexible dieting. And I’ll be doing it with the help of Avatar Nutrition. 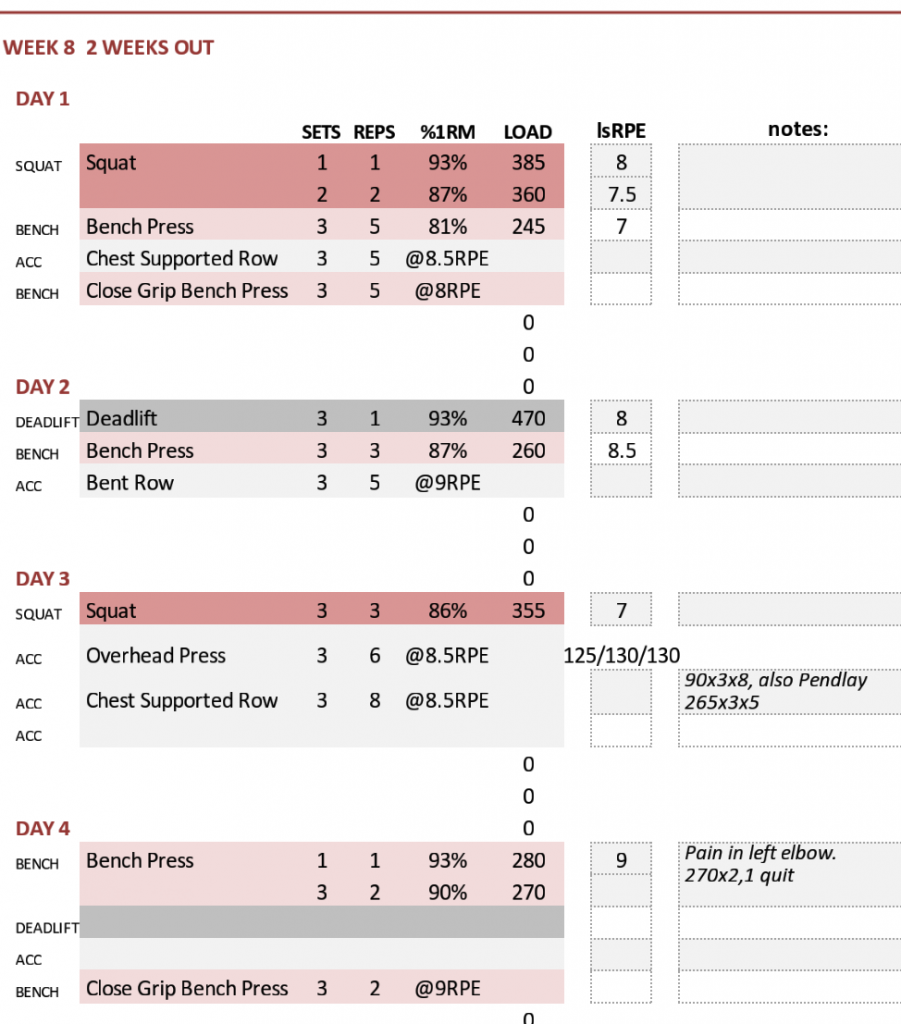 Dynamic stretching prior to any lifting session. Quick: Usually takes about 10 minutes tops. Simple: Easy repetitive movements aimed at warming up the target muscles and preparing for load. Here’s what I do almost religiously prior to a squat or deadlift session:

If there is enough interest I’ll try and piece one together for my warmups for the benchpress and overhead press as well!

At my height, 6’9″, I’m already at a disadvantage and the deficit makes it that much harder. Is there a benefit to it or am I just a sucker for punishment? Let me share some insight not only into why I personally find them to be my favorite assistance movement for the deadlift but how they can benefit you as well.

In the simplest terms a deficit deadlift is when you place yourself into a position that moves the bar’s starting position further away from you (vertically). That object you stand on can be a box or a weightlifting plate typically ranging from 1-4″ inches. I personally have found that at my gym the 35lbs bumper plates suit me well and they are around 2.5″ thick.

The reason why we do most assistance movements is to try and work on the weaknesses that are lagging on the main movement. You may have heard the phrase that a chain is only as strong as it’s weakest link? The deficit deadlift tackles the weakness associated with the start of the deadlift: floor speed. The is the amount of inertia you need to initially break the bar off of the ground and begun its traveling motion upwards towards lockout. If you are weak/slow in the starting position you may sometimes find yourself stalling out halfway through the lift or compensating via poor form with hitching or crutching of the bar onto the quads. The deficit deadlift will help you build strength which will correlate into speed when breaking off the floor due to increased range of motion and, as a bonus, you’ll also be recruiting more of your posterior chain and quadriceps into the movement compared to the deadlift alone.

Just like you would do floor presses or board presses to improve lockout strength in a benchpress the deficit deadlift will help with only a portion of the movement involved in the deadlift! When I want to pull big weight I need to ensure that each aspect of the lift involved (breaking the floor, bar speed, lockout) is the strongest it can be!

Those toothpick legs tho… do I even lift?

Setting up for the deficit deadlift starts you off at a mechanical disadvantage but because you are putting yourself through an increased range of motion for the whole lift (thanks to those extra 1-2-3-4″) you’ll get stronger at it which will translate into faster speed off the floor when you go back to a just pulling from the floor. Before I started rotating this assistance movement into my routine my floor speed with anything 85%+ was crap. After doing months of incorporating deficits into my routine my bar speed has shown vast amounts of improvement and I highly suggest performing this lift!

For my deficit deadlift setup I always end up using a 35lbs bumper plate which is roughly 2.5″ as this is what I have found to work best for me. I’m still able to get into my correct deadlift stance while still managing to have a starting position that gets the bar under mid-foot. One thing you will notice that changes is the bar will start further out from your leg then you may be accustom to. When I perform from-the-floor deadlifts I’m always scraping up against my shin. With deficits I don’t feel the bar rub until its at or above my knee. I place my feet and arms the same width apart as I normally do with a conventional setup and begin the routine with whatever weight is programmed for that day. If this is new to you I suggest starting off with a 1″ deficit and make sure you can still get into a comfortable stance/position and perform some sets here before trying to add more height. Mobility will be a factor here for those that find it difficult to get into the starting position. Otherwise you just pull as you normally would with the exception that you are standing on a plate instead of the floor!

So you may or may not have noticed that I disappeared for a bit on most social media outlets, especially YouTube. This video tells you why. I plan on updated this website more frequently to keep track of my workouts to help keep myself honest in remembering what had been done previously and to also give you insight as to how my programming works!

Don’t worry. I haven’t vanished. Life got turned upside down for a little bit – I’ve almost got both feet back on the ground and I plan on doing a YouTube video to update that, but as far as things are going now here’s a quick update on this weeks progress.

It’s still ongoing. Since beginning it on cliche New Years Day, I’ve gone down to 259lbs and finally broke the 260lbs barrier! Looking to be on track to get under 255lbs by the end of March which should be the end of the Challenge. I may extend it out further but we’ll see…

Yep this is still going on as well. The one downside to weight loss for me, which has become incredibly predictable, is a loss in strength through certain lifts. In particular? The benchpress for starters with the squat not lagging too far behind…

Caught up on some accessory lifts…