First and foremost let me explain that my mindset when it comes to reviewing any product is that the most important aspect is the effectiveness of that product above all other things. Previous reviews on products I’ve done in the past have had their downfalls due to different aspects but were eventually given a thumbs up/recommendation simply based on the effectiveness of the product itself. And as always, especially with preworkouts, your mileage may vary – things that work (or don’t work) for me may have the complete opposite effect for you. 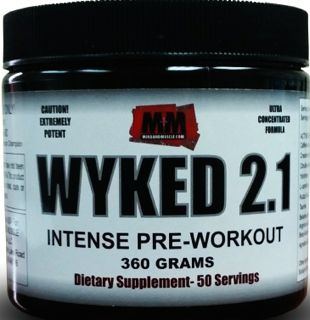 WYKED 2.1 was a preworkout from Mind+Muscle that I was given to review and LOG at Anabolic Minds. Initally, from looking at the label I wasn’t too impressed. Some of the ingredients were underdosed and those that weren’t required nearly 3 scoops to even attain what I would consider to be beneficial dosages which in the long run causes you to burn through the tub faster (my desensitization to some of these things is on me!) Ingredient profile aside I decided to give WYKED 2.1 a run for the money. I started my preworkout routine like I do any other day: Grab a shaker cup, fill it up with about 16 oz. of water, throw in 2 full scoops of WYKED, shake it up and toss it back. First taste tests I usually take my time so that I can savor the flavor and get a feel for the taste… of which was absolutely god awful. There was no sweetness whatsoever, just marked bitterness that pierced the tastebuds right off the bat and remained long after I had painfully finished the whole bottle… and I mean painfully. It was to the point where I was pinching my nose just to get it to go down the flavor was that disgusting. Think of it as if you opened up 20 packets of Sweet’N’Low and drank that as your preworkout. Bland, bitter, horribly long lasting aftertaste. But I wasn’t going to have that be the downfall of WYKED as long as it proved itself in the gym. The flavor I could get over… the lack of effectiveness in the gym I could not.

Energy was hit or miss. It would either come on strong all at once and fizzle out/cause a crash, or it would come on gradually and linger but never peak to the point where I considered myself to be energized, in the zone, and laser focused. The first few times I took WYKED the pumps were absent to the point I had to supplement in my own standalone agmatine to get anything going. Don’t think you’ll be able to turn and look at yourself in the mirror and see veins popping up everywhere. The one thing WYKED consistently did was spark some thermogenesis to the point where I’d be stripping down layers during my warmups rather than after. I can’t say I’m surprised… 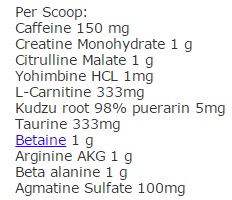 Looking at the profile I’d say the ingredients could use some tweaking… not all of them (beta alanine, creatine), just some of them. Maybe a bump in the amount per serving or replacing a few things here and there. Regardless, my results with this after about two weeks of use: No energy. No focus. No pumps. No endurance… did I even take a preworkout? While some of the ingredients here might be beneficial as a beginner-intermediate level lifter… for those of us looking for a bigger kick I recommend you look elsewhere. I attempted to try direct-to-mouth dosing and for awhile it worked but depending on how much water you used that terribly awful aftertaste would creep up and hang around. The tub itself even seems to suffer from some moisture problems. When I first opened the container things were looking great but two weeks into the log and I was having clumping issues and the granules were taking on the appearance of GMS to the likes of something such as Purus Labs NOXYGEN. I’m not sure if there was a silica packet in the container or not because I never got down into the tub far enough to find out.

I tried guys. I really tried to stick around and enjoy/use this product. I couldn’t get beyond the flavor… and couple that with my bad experience with effectiveness… this is one product I’m going to have to step away from.