Betaine? What The Hell Is That?

You may be quite accustomed to this ingredient in many supplement formulas, both proprietary and full disclosure labels. You may have never heard of betaine, commonly labeled as trimethylglycine on most products available today. You may not even care to know what betaine is or what it is capable of but I am here to help you hopefully grasp a better understanding on what this ingredient in particular does and how it can help your workouts and body composition in the future. Don’t just know what you are taking… understand WHY you are taking it!

Betaine originated from sugar beets but is also naturally occuring in most living plants and animals and is an oxidation product of choline metabolism. Now it’s time to get all SCIENCY up in here! Betaine’s primary function is as a methyl donor and as an osmolyte. Methyl donors such as betaine are of major importance as anticarcinogenic nutrients. In fact, a lack of sufficient methyl donor nutrients such as choline, betaine, methionine, and folate is the only nutrient deficiency known to be carcinogenic in and of itself. As an osmolyte, it plays a role similar to taurine by protecting cells from dehydration by drawing water into the cell. 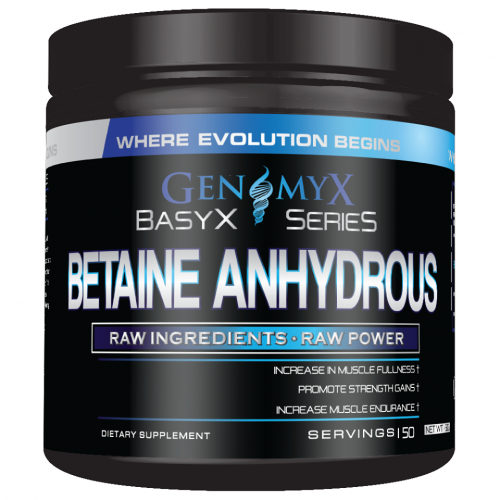 So It Helps Me Get Swole, Thats Great?

Well hold on just a second. It does help your cells hold onto water much like taurine (and somewhat creatine monohydrate). But someone decided to do a study and see what other implications there were with betaine supplementation. The results speak for themselves.

In 2011 a study was led by Jenna Apicella from the University of Connecticut titled “The Effects of Betaine Supplementation on Performance and Muscle Mechanisms.” In this study 12 men underwent two weeks of supplementation with either 1) 1.25mg of Betaine twice a day or 2) a placebo. These first two weeks were followed by a two week “washout” period in which neither group took betaine or a placebo. Following this washout period the subjects switched groups, and those taking placebo before now received betaine and vice versa. Before and after each two-week period subjects completed a workout. Circulating Growth Hormone (GH), Insulin-like Growth Factor 1 (IGF-1), Cortisol and Insulin were measured. Muscle biopsies were also taken from the quads of the subjects to evaluate protein signaling (specifically Akt, p70S6k, AMPK).

Betaine supplementation produced a near significant increase in GH (+4%) and significantly increased IGF-1 (+12.4%) levels. Not only that, betaine also significantly decreased cortisol (-4%) levels. There was no difference in insulin levels. There was a measurable increase in total muscle Akt (+1% total Akt), a serine/threonine protein kinase that plays a key role in multiple cellular processes, as well as the compensation of training induced decreases in the phosphorylation of of Akt at S473 and p70 S6k at T389, both enzymes that are intricately involved in cell- and in this case muscle growth, it can be expected that long(er) term supplementation with betaine would also improve the hypertrophy response to resistance training.

You Lost Me In All That Sciencing

Betaine supplementation at about 2.5 grams per day enhanced both the anabolic hormonal profile and the corresponding anabolic signaling in muscle tissue.

Thankfully at least one company has put this 2.5g daily dose of Betaine in a rather robust mix of other staple supplements!

ENDURATE combines Betaine (2.5g) with a full dosing of Creatine Monohydrate (5g), Beta Alanine (3.2g), HICA, Sodium Chloride and Potassium Chloride. However if thats not for you Genomyx offers Betaine Anhydrous by itself as part of the BASYX line. Look for it at your preferred online retailer!

Woke up. Got a haircut. Threw 2 scoops of Origin into a shaker cup I had just filled up with a bottle of water along with 6g of CM and 1g of Agmatine, just to experiment I forgot my headphones at home and was kind of bummed about that but knew that I had work to do.

Focus was great. I went through this workout surprisingly fast. Origin had me zoned in and focused even without music in my ears. Didn’t really feel much in terms of pump until I got to the bicep routines. Walked out feeling great… didn’t think I’d even come close to 365 for rack pulls. Should have attempted 405! Last time I did that was quite a few years ago!

Today was a fun day in the gym for sure… I ended up leaving that place having broke one of the dumbbells 😐 but it wasn’t my fault! I blame ORIGIN!

Quick and dirty. Slept in and had to see the parents for the traditional birthday dinner and I wanted to squeeze in a quick workout. Since I had taken some slight shoulder work during the last BACK exercise this workout today was short and sweet. ORIGIN about 30 minutes prior… but then I lost track of time playing Black Ops 2 on my PS3. So I took one more scoop prior to even getting into the gym. I was almost expecting some sort of stim/caffeine overdose feeling because of the relatively short period of taking the 3 scoops but this did not happen at all. The same smooth energy came and left without a crash and the focus was just as intense as ever.

So much for not feeling that back workout yesterday during the workout… woke up today sore as ****! Something must have been working! Slept great and woke up ready to get back into the gym. I wanted to do shoulders but since I hit some of that during yesterdays back workout I decided to hold off and do arms instead. Threw down 2 scoops of ORIGIN and headed for the gym.

I’m not sure what I would be doing if I wasn’t working with this much volume because ORIGIN gives me energy for DAYS. Although next week I will be switching the rep counts lower and working with some heavier weights for this workout. I have always responded very well to the low weight/high rep scheme (although feeling like I get some strange looks in the gym for lifting what appears to be extremely light weight :\) but I’d like to switch it up every once in awhile and get back the medium/heavy weights and keep the muscles guessing. Due to the fact that I’m currently training for the mini-marathon I’ve decided to take my leg workout out completely. It’s difficult to lift legs and then try and run long distances the following or a few days following that routine. So for now my split has become: CHEST/BACK/ARMS/SHOULDERS with cardio around 3-4x a week. I’ve really been enjoying my new routine right now and hope to see results in the mirror…

I was super psyched to get into the gym today and give this workout a go! Woke up and shot straight out of bed I was that excited! Although I didn’t post it here because I didn’t take ORIGIN prior, I did run 6 miles yesterday which happened out of the blue so I didn’t want to do anything that involved the legs whatsoever today. I took 2.5 scoops of ORIGIN before working out and the workout was epic (at least for me). Focus was strong… perhaps TOO strong

My workout partner today remarked on how although he didn’t like coming to the gym when it is crowded, he didn’t mind the plethora of hot women to look at to which I responded to him with “what hot women?” I didn’t notice anyone else in the gym besides myself and the weights I was moving. He blamed it on “marriage goggles.” I blamed it on ORIGIN

Even right now as I’m typing this I can still feel the energy surging through me. Nice and smooth and I know I’m not in for a crash later!

STANDING LAT PULLOVER: 40×10,10,10,10 (these were new to me and very enjoyable but my height limited the stretch I could get since the weights would return to the stack before I was fully stretched

Low weight, volume, stretch and squeeze were all the name of the game today. I miss the “pump” I used to feel taking other preworkouts on a day like this but just because it isn’t there doesn’t mean nothing happened… I’m sure I’ll wake up tomorrow and feel plenty sore. This workout lasted around 1.5hrs today and ORIGIN kept me going and kept me focused the entire freaking time. I’m still in the zone now. Maybe I’ll do some abs

This time I took 3 scoops of ORIGIN prior to my workout since I was pretty tired from working the night before and needed a little extra kick to get myself into the workout mood. I had such a high amount of energy that I didn’t want to leave the gym after my workout concluded… and I didn’t even want to go to bed when I got home but I had to force myself to relax (thanks, benadryl

Needless to say my chest is sore as **** today. After the last of the pressing movements it didn’t even feel like I was lifting anything during the fly movements which made me kind of upset because I didn’t feel like I was working anything. Woke up today realizing that just because you don’t get a pump from the workout doesn’t mean you aren’t activating the fibers lol. ORIGIN did its job again today at giving me great focus, drive, and maintaining my intensity. Rest periods were incredibly short. I had a partner lifting with me today so whenever he finished his set (of the same reps I was doing) we’d switch places. We got out of there just a little over an hour. Quick, effective workout.

The day I worked chest during the “blizzard” I actually wanted to do chest/tris but didn’t have the time. I didn’t feel like doing my back/bis routine just yet because I want my legs to have some more rest so I just decided to throw Tris/Bis together and give it a run. I enjoyed it

This log is starting to become the light weight high rep special haha… it’ll switch back to what I usually do here next week. This workout was AWESOME. I’ve never actually specifically trained forearms so that was a first. After the last couple of sets of reverse curls my forearms were about to explode. As I moved on to the tricep pushdowns they felt really easy and I was concerned I wasn’t going heavy enough but as I approached the last two sets my triceps were on fire. Walked out of the gym with stiff arms and felt fantastic. Again ORIGIN helped me go the distance here. Although ORIGIN may not necessarily be a “pump” product, my arms were certainly swollen as I left the gym. Concentration was dead on and energy levels were high and never diminished.